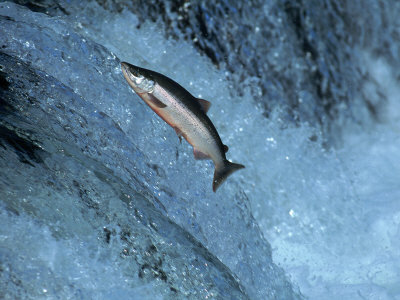 It is so easy to go with the flow, just floating along in life with everyone else, ordinary, doing anything you please, not making a difference in anyone’s life. If it feels good do it! If it’s popular be in it!  But let me ask you this? It might be easy, it might be fun at the moment, but what will be the end result? When you get to the end of your life and you take an account of what you did with the years that were given you, what can you say, “I sure partied good while I was here!” One thing that really hit me after coming to know the Lord is, “I get one chance at this life, there are no do overs, it’s all or nothing!” So what does that mean? It means I need to swim upstream! Consider the Salmon, he travels from different oceans, swimming from long distances, to come to the one river that he was born from. Then he,  instead of flowing with the current, swims completely against the norm, fighting to get past all the obstacles that are ahead of him.; birds of prey, wolves and bears. But the thing that drives him upstream and to be different, is that he knows that when he reaches his destination that he will produce life for others. His death in the end will have made a difference in so many others that were waiting upstream, starving, ready to give up, discouraged, needing refreshed, needing life.  You see Jesus was a person who swam upstream, and because of Him  dying on the cross, reaching His destination, not going with the norm of the world, He saved the world!  So many people in live that choose to do as Jesus, has made a huge impact in life. Why?  Because they choose to swim upstream! It’s easy to go with the current of this world, be as this world, go see the movies of this world, talk like the world, but the end result is that no one gets helped!  But when we swim upstream and die to ourselves, and stand out as children of God, we can reach the starving, dying world that needs to be refreshed who is waiting upstream for us.  So today will you start swimming upstream and dare to be like Jesus? Is it worth it? Yes!